The cleanup of the fire-impacted Super Typhoon Yutu debris site is now in its final stages. The site has been successfully cleared of metal and other debris, and a sampling analysis plan has been finalized, and the contractor will soon conduct a final round of soil testing to detect whether Chemicals of Potential Concern (COPCs) are present in quantities that exceed environmental thresholds.

Assessing potential contamination and addressing contamination is an important part of this cleanup effort, as it is critical to ensure that these potential COPCs do not threaten the health and safety of the Tinian community. Over the next six months, the contractor and members of the Inter-Island Solid Waste Taskforce (ISWTF) will continue to work together to determine the best course of action in regards to the handling, transport, and disposal of any contaminated soil found to exceed environmental health and safety standards at the debris site and complete the site clean-up.

From early July to mid-October, Allied Pacific Environmental Consulting, Inc. (APEC), the contractor for this emergency debris cleanup project, completed the recycling and transporting of recyclable metal waste and cleared the site of other debris. The ongoing effort to clean up remaining Yutu debris at the holding site on Tinian was fast-tracked when a fire that appears to have been caused by summer heat conditions prompted the declaration of a state of emergency on June 23, 2022. 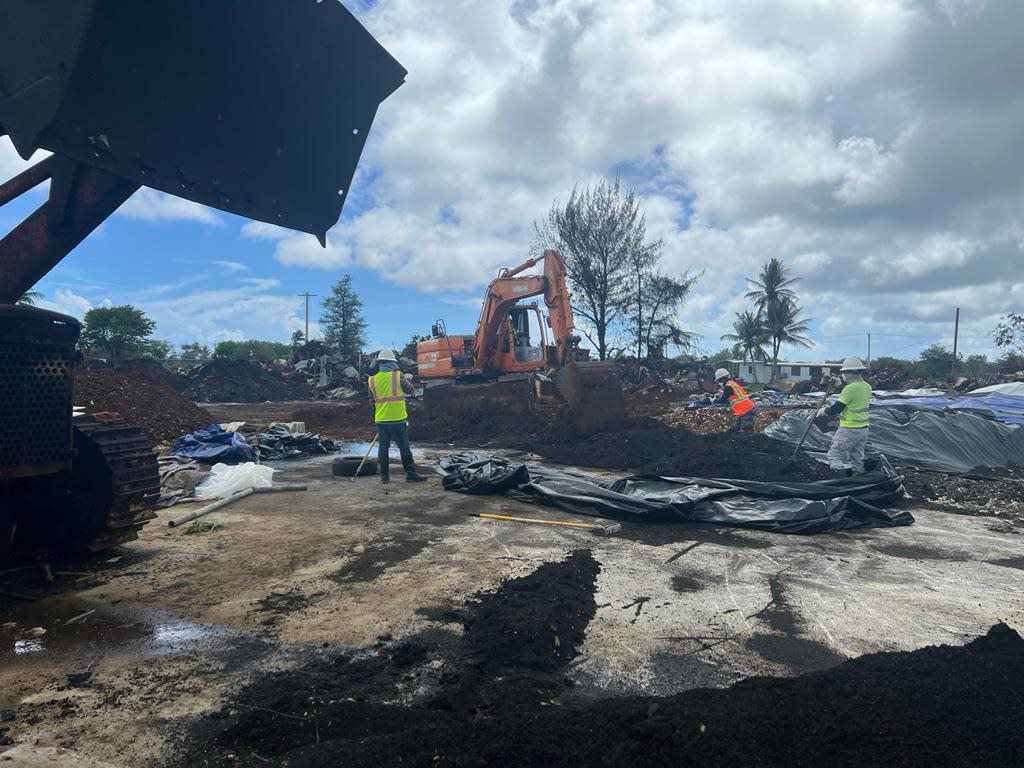 A file photo of the Super Typhoon Yutu Debris site from early July, around the period of time when contractor Allied Pacific Environmental Consulting, Inc. (APEC) mobilized its field staff and equipment to lead the cleanup of site. (Contributed Photo)

The emergency declaration combined with funding from the federal Additional Supplemental Appropriations for Disaster Relief Act (ASADRA) allocated to the U.S. Environmental Protection Agency (EPA) to support Yutu disaster response allowed for expedited response. Proposals were received, and APEC was selected as the contractor to lead the cleanup of the debris site and to protect the Tinian community from potential threats to health and welfare caused by the fire and burnt waste materials at the site.

In July, APEC conducted preliminary soil testing at various locations on the site where fire-impacted debris stockpiles were located. The testing was to determine the presence of semi-volatile organic compounds (SVOCs), metals, dioxins, and furans. APEC collected 14 soil samples at depths of six and 18 inches below ground surface. Of the 14 samples, three contained dioxins levels that exceeded EPA threshold for industrial sites. This preliminary soil testing was used to identify locations for more extensive sampling once materials were removed. 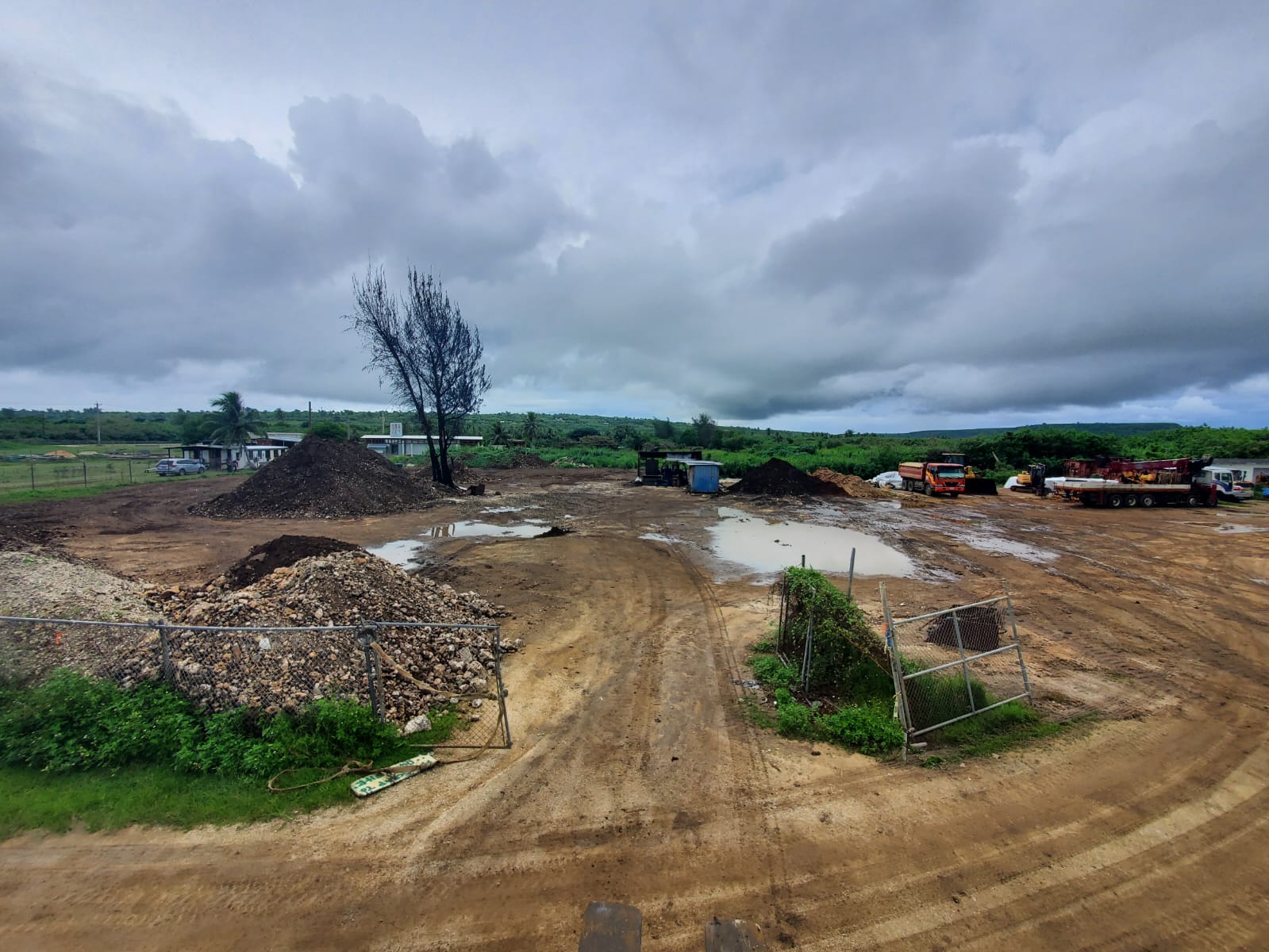 An Oct. 14, 2022 photo of the Super Typhoon Yutu Debris site on Tinian, which was impacted by a fire earlier this year. (Contributed Photo)

In December, APEC submitted a draft Sampling and Analysis Plan (SAP) for the Super Typhoon Yutu Debris Collection and Removal Project for the Municipality of Tinian and Aguiguan to the ISWTF, which includes the Office of Planning and Development (OPD), the Bureau of Environmental and Coastal Quality, Department of Public Works, the Offices of the Mayors, and EPA. The draft SAP details the proposed scope of soil sampling and the COPCs that the potentially contaminated soil will be tested for. The COPCs that APEC will be testing for include asbestos, metals such as arsenic, cadmium, chromium, and lead, volatile organic compounds, dioxins, and furans.

To ensure potential risks to public health from the debris fire have been identified and remediated, APEC will be collecting around 400 samples across 10 designated locations at and around the debris site. These samples will be sent to labs in the U.S. for analysis. Once test results are received, APEC will prepare a report with recommendations on next steps for the handling and disposal of the potentially contaminated soil if any COPCs are detected at levels that exceed EPA's thresholds for industrial sites. The process— from sample collection, to the receipt of test results, to the review, approval, and submission of a final report— is projected to take six months.

OPD Director Kodep Ogumoro-Uludong reflects that OPD is grateful for the support of all of our partners in this effort to promote a healthy environment and safe waste management systems now and in the years to come.

Information gathered from this disaster, the cleanup, and soil testing will be included in the CNMI's Comprehensive Integrated Solid Waste Management Plan (CISWMP). The CISWMP is currently in development and will ensure safer, more sustainable debris management, and support the CNMI's work towards achieving Sustainable Development Goal (SDG) #12: Responsible Consumption and Production, which includes achieving and maintaining environmentally compliant waste management facilities and processes.

Learn more about the SDGs and the ten-year plan ahead for the sustainable development of the CNMI in the Comprehensive Sustainable Development Plan, found here: https://opd.gov.mp/assets/2021-2030_cnmi_csdp.pdf.